Here is the ‘cross update from Dave Hagen!

I just roughed in the gym (w/o the pit) and art building loop – the wind wreaked havoc in places yesterday making them super tough/impossible to ride but ended up riding 3/4 of it (although just keeping it upright was the biggest workout). Makes for good sloppy mud simulation!

If anyone would like to meet up TODAY (12/21) at 12noon at the amphitheater to do some laps to get it more ridable and may even have a good course for the Sunday practice and maybe beyond.

The Wednesday 12noon practices will continue through the break. Tomorrow (I won’t be here) you all can do the same course as last weekends (just look out for autos/peds). It looks like there might be another good round of snow tonight so the course may be a lot tougher.

There will also be 11am Sunday practice races. This Sunday we can use the same course backwards and the same with the next weeks Wed. 12noon.

I may try to set up something new if possible after that but only if we don’t get much more snow.

The new venue for this weekend at Tiger Park in Aztec offered up some new terrain for everyone with some sandy run/ride ups, gravelly paths, sandy sections and some thick grass accentuated by the obligatory collegiate maze. Thanks to the City of Aztec, Pete Shirk and Cottonwood Cycles for hosting the event.

Day 1 began with the standard weather so far this year, dry and relatively mild. The Men’s B class was a pack race for the first few of the 4:40 laps with the usual suspects at the front with one newcomer, Adam Digby (FLC). Jacob Smith (FLC) soon separated himself and despite repeated attempts by Digby, took the win with Digby in second and Troy Hachmann (FLC Alum) having yet another solid ride for third.

The Open Women’s race also stayed tight for the first few laps until Sofia Gomez Villafane (FLC) created a gap over the chasers and went on to a comfortable win. Lauren Catlin (FLC) and Sarah Sturm (FLC) have their form coming on at the right time to take 2nd and 3rd. Series leader Brianne Marshall (Stan’s NoTubes) had an off day and finished 4th.

The Men’s 35+ race had the same group of instigators start off the race but the outcome was highlighted by a newcomer. Matt McGee (2Cross) was in town from Las Vegas and showed up to create a gap from the beginning and grew his lead throughout the race to take a convincing win over the Stan’s NoTubes tandem of Frank Mapel (2nd) and Michael Carroll (3rd). Jon Delacy (DWC) again showed he was the best of the rest by finishing 4th.

The Men’s A race was sure to be decided by the FLC racers vying for spots on the National Team that will represent FLC on Januray 13th in Madison, WI. Leave it up to Sepp Kuss (RMCF Sweet Elite) to derail those plans by keeping tabs on Skyler Trujillo (FLC) and Rotem Ishay (FLC/Jamis) for the majority of the race and then pulling away to take the win – Trujillo 2nd, Ishay 3rd. Mike Sampson (FLC) had his best result to date by riding to a solid 4th and Robbie Jones (FLC) kept up the consistent results coming with a 5th place effort.

Day 2 in Aztec conditions were markedly different with a brutally cold wind out of the west making it very cold out in the elements and a few snowflakes flying. The course was run in the reverse direction from the day before with a few additions to make it a longer lap.

The Men’s B race seemed a tight pack race from the beginning but the group didn’t realize that Peter Marshall (DWC) had exploded off the front to take the win in dominating fashion. Jacob Smith (FLC) road the majority of the race alone to take 2nd and Troy Hachmann (FLC Alum) overcame a first lap mechanical to take 3rd yet again.

In the Open Women race Brianne Marshall (Stan’s NoTubes) exacted her revenge on everyone by using her teams cannon to obliterating the field and even passing all but one B man despite starting 1 minute behind them. Sofia Gomez Villafane, Sarah Strum, Lauren Catlin and Brittany Clawson formed up the FLC Cycling chase train before spreading out in that order to finish 2,3,4,and 5.

The Men 35+ field was missing the guest instigator from the day before and the Frank Mapel (Stan’s NoTubes) Michael Carroll (Stan’s NoTubes) duo (they might as well be riding a tandem) created a small gap over Andre Michaud (DWC) and Jon Delacy (DWC). The DWC racers did their best to close down the gap but fell short with Mapel taking another win, Carroll in 2nd, Delacy 3rd and Michaud 4th.

The Men’s A race got off to a quick start with Sepp Kuss (RMCF Sweet Elite), Skyler Trujillo (FLC) and Mike Wilk (FLC Alum) trading off on the front of the race with Chad Cheeney (RMCF Sweet Elite) holding a gap on a group of FLC chasers. Trujillo and Wilk turned up the throttle to gap Kuss and then Wilk bobbled in the hopable barrier section to give Trujillo the winning margin. Kuss kept riding hard to hold onto 3rd and Cheeney held off the chasing Mike Sampson (FLC) and Robbie Jones (FLC) to take 4th.

The Stan’s NoTubes Series Finals are this Sunday, December 16th up at Fort Lewis College with Open Women/Men B at 10am and Men A/Men 35+ at 11am. The venue will be slightly different than in the past with the Start/Finish next to the Amphitheater/Clocktower on the south side of Whalen Gymnasium.

All please be sure to make it to the Series awards on Sunday night at 6pm at the Irish Embassy pub at 9th and Main Ave. Should be a great time with the CX community coming together to celebrate the season.

REMEMBER – The races in Aztec this weekend are at the Tiger Sports Complex (not at the Riverside Park course as in the past). From the north, before entering Aztec proper (about a mile after the speed limit goes down to 45mph) there’ll be signs to turn left to Navajo Dam and Tiger Sports Complex – turn left and follow road to the end (not turning left again to go to the dam).

There may be some thorns/goatheads out there so it’d be a good weekend to have some Stan’s NoTubes Latex in your tires/tubes (but truly, all the time is a good time to have it in there).

Very Brief Race Report –
In the Men B – Paul Adams (Kokopelli) and Mint Henk (Devo Fanatics) started out doing battle from the gun while Beau Savage (DWC) and a slow starting Troy Hachmann (FLC Alum) gave chase. Late in the race Mint dispatched of Adams to take the win, Hachmann held his own in third while Savage succumbed to a late race flat (hint – see above about latex).

Brianne Marshall (Stan’s NoTubes) was shot out a cannon at the start of the Open Women’s race to take a convincing W, while a Sofia Gomez Villifante (FLC) and Sarah Sturm (FLC) melee ensued for the runner up spot with Sofia pulling ahead near the end for second.

Frank Mapel (Stan’s NoTubes) proved once again that he is the top of the heap in the 35+ men by using his team’s cannon to launch him to the win. A group of 5 pursuers remained tightly bunched with Jon Delacy (DWC) and Andre Michaud (DWC) flexing their horsepower at the end to take 2nd and 3rd.

The Men’s A race was a hard fought battle between Mike Wilk (FLC Alum) and Skyler Trujillo (FLC/Boo) from the gun as they separated themselves from a few closely knit smaller groups that containing Ned Overend (Boure/Specialized), Travis Brown (Trek), Ryan Cleveland (FLC), Sepp Kuss (RMCF Sweet Elite), Adam Snyder (Jamis) and Andrew Llewellyn (FLC). Then a miracle happened, Wilk rode away from Trujillo to take the win while Rotem Ishay (Jamis) overcame a poor start to fly by everyone else to take a surprisingly close 2nd with Trujillo in 3rd.

Also remember – all of this stuff is also on the Stan’s NoTubes page of cycling.fortlewis.edu and on the FLC Cycling Team Facebook page (You should go like it if you are a FBer).

Hope all had good turkey (or tofurkey).

Wednesday 12noon practice races will continue and this weeks course is last weeks course backwards (counterclockwise around the track).

A new practice course has been set up so the Wednesday 12noon practice is on for the week. It starts going clockwise in the stadium from the 50 yard line then immediately heads up the run up, out the gate and into the soccer practice field – orange flags/left, yellow/right.

Practice race this weekend – Sun at 11am. There is not an official race this weekend but we might as well burn off some of the Thanksgiving butter. Use the same practice course as Wednesday. If others want to rally for a 11am Saturday session also, please feel free to do so.

The Cortez Journal had an article about last weekends racing action:
http://www.cortezjournal.com/article/20121119/SPORTS/121119897/-1/Sports/Cyclocross-success–

For those that want to travel this weekend or will be in the Santa Fe area, Hawke Morgan is running a super cool old-fashioned point-to-point CX race down there on Sunday – check out the details:
http://www.bcdracing.com/nmofriver.html

There is also a race up in Fruita this Saturday, info:
http://ltrevents.com/wpress/ai1ec_event/ltr-cyclocross-series-3-fruita/?instance_id=184

We sure are missing Betsy Richards (and Joel) at the races – for the latest updates on her progress check out www.durangowheelclub.com.

Have a good Holiday Weekend,
HAGEN

If you haven’t seen them already please see the preliminary Dolores CX results and get back to me with any discrepancies. It looks like it was a slop fest true to CX – wish I could have been there.

The schedule for this weekends races in Cortez (Saturday and Sunday) is as follows (and will be the same for the rest of the races in the series).

10am – Men B/Open Women
11am – Men A/Men 35+
Registration closes 15 minutes before each race AND don’t forget to bring your number (it makes tabulating series results much easier).

I have attached the poster for this weekends race in Dolores (looks like it’ll be CX weather, YES!). Please keep in mind that it is no longer a USAC sanctioned race so no license will be needed.

Please keep the numbers you got yesterday for the rest of the season – it’ll be $1000 for a new number if you forget.

I am working on results but writing and typing with a splint on my hand takes a while. Please let me know if there are any discrepancies and I’ll get ’em fixed. 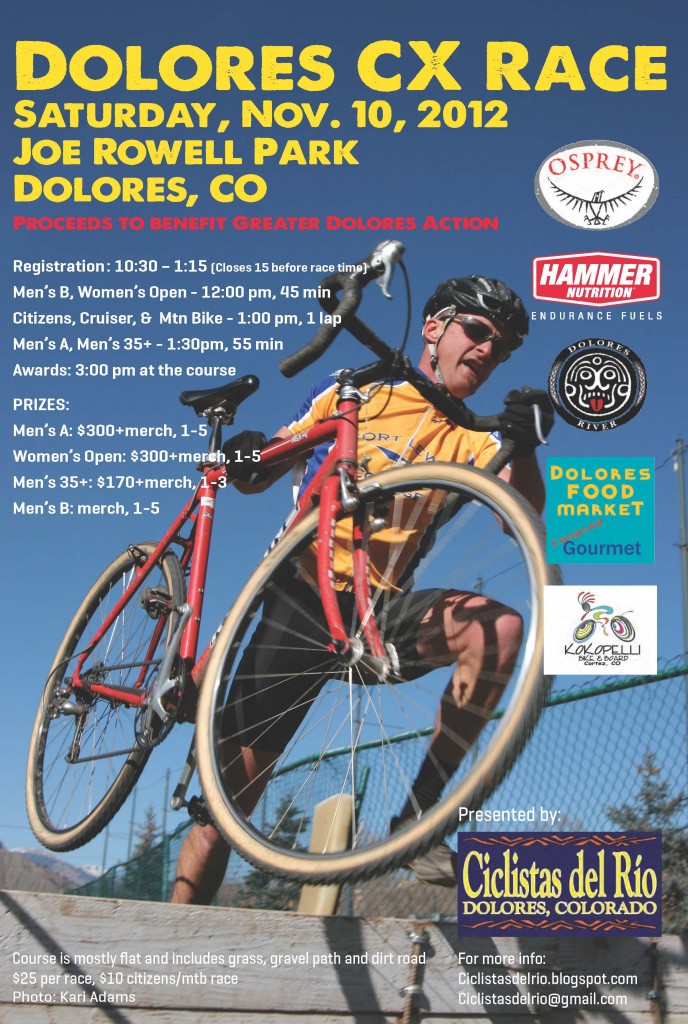 Practice:
CX practice at FLC will be held Wednesday’s at NOON. Practice will continue on until January. If you can’t make it to the noon practices and are planning on coming up some other time PLEASE STEER CLEAR OF THE OTHER TEAMS PRACTICING OR ANY OTHER ACTIVITY IN THE AREA as these folks have priority until November. Starting November 7th we will begin to have Wed and Thurs 4pm practices also. See you out there.
Races:
CLICK HERE FOR THE NM CROSS SCHEDULE: 2012 NM CX Schedule

All race times are as follows: